Felt at Home: Vessels and Homewares

BYO lunch, 2 old towels, a plastic shopping bag (to take home wet pieces), an apron if you would prefer not to get a bit wet, and a sharp pair of scissors. 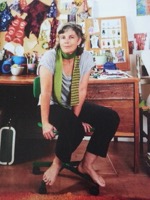 Mad keen on textiles from an early age, Gill experimented with everything under the sun: dyeing, sewing, embroidery, knitting, rug-making, you name it. In 1994, she attended her first felt-making workshop and that was it. She had found her perfect medium and has been felting ever since. Over the years, Gill has attended many workshops, often with the who’s who of the international felting world, including Jorie Johnson, Marjolein Dalinga, Alexander Pillin and Jeanette Appleton. Gill has been teaching workshops since 2002 and has introduced hundreds to the joys of felt-making and the versatilities of handmade felt. Gill designs and makes one of a kind accessories which she sells through various handmade craft shop and galleries. Her work has been featured in a variety of magazines including Vogue Living and Home Beautiful. ‘I’m continuously inspired by this extra-ordinarily versatile medium, it’s wonderful properties and its amazing history. A never-ending world of possibilities. What’s not to love.’’