Join the fun of the Ukulele Explosion which is sweeping the world. Quick and easy to learn in a fun setting. Play tunes straight away and take away the knowledge and fundamentals to continue your learning experience. Follow up with group meetings that are continuously available in your area to assist your journey. Enjoy any music style of your choice. The Ukulele brings a smile to every face.

A selection of quality and pre-prepared Ukuleles are available for sale at the first meeting from as low as $40. Good advice and demonstration is supplied. 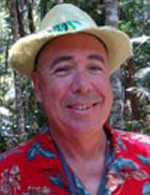 John Chandler studied a variety of stringed musical instruments in the 1970’s including the Ukulele. It has been in recent years that John has further developed his Ukulele skills with intensive training from Hawaiian exponents such as Duke Tatom, Daniel Ho, Troy Fernandez and Canadian artist James Hill. John has studied at the famous Roy Sakuma School of Ukulele in Hawaii as well as with Byron Yasui, head of music at The University of Hawaii. John further attended advanced workshops in Hawaii as well as the 5th International Ukulele Convention in November 2006, the 45 Hawaiian Ukulele Festival in 2010 and is a member of the Ukulele Guild of Hawaii. John has travelled with friend and colleague Jumpin’ Jim Beloff, a major influence in the resurgence of the Ukulele in the 1990’s, as well as with Canada’s ‘King Of The Ukulele’ - Ralph Shaw. John has studied songwriting, has attended and performed in Ukulele festivals, The Marble Bar at The Sydney Hilton, and other venues. He is a committee member and organiser of SSCUM ukulele club and is a keen collector of a wide variety of specialised ukuleles. John has been consistently teaching Ukulele since 2006 and seen over 4000 students discover and experience the joy of playing the Ukulele after attending his workshops. John is also the exclusive Australian importer and distributor of major U.S. Ukulele brands.