During 2019, Northside Produce Market celebrates its 20th year of trading. We couldn’t have done it without all of the dedicated North Sydney Community Centre staff and volunteers, our wonderful customers and of course all of our fabulous stallholders. Throughout the year we will feature some of the stallholders so that you can discover a little more of their story. 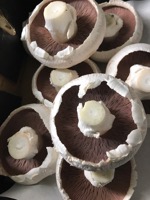 The Margin family, Kim, Christine and sons Charlie and George started growing mushrooms 10 years ago with 20 blocks in the old Ice Rooms of the Margins Ice Cream and Soft Drink factory at Woy Woy on the Central Coast. It was a major learning curve being first generation farmers. They now have 1728 blocks and are at the top of their production. growing Swiss Browns, White Mushrooms and Oyster Mushrooms. Kim and Chris enjoy spending the extra time with their sons and developing the business together. The business survives on farmers markets, growing all week and selling on the weekend. ‘It is alot of work however it is a beautiful product and a pleasure to sell. One of the nicest things about farmers markets is meeting the customers. They put trust in us to provide them with the best quality and freshness which I think we excel in. We have been a part of the North side Produce Market for 9 years and love our fortnightly market there.’

Paddy the Baker is Sydney’s only Irish bakery specialising in traditional Irish breads. Paddy arrived almost 10 years ago with his wife and young family, escaping the drastic effects of the GFC at home. They embraced this new country and a year later established their bakery doing everything the way they would back home. Their Seriously Seedy Soda Bread and Traditional Potato bread was an instant hit amongst Irish expats and Aussies too. In September of 2016, Paddy launched Matty’s Healthy Pizza Bases, named after his son. Of course Paddy wanted to offer this at Northside Produce Market and now this 2nd stall often sells outs of the range of bases, sourdough and gluten free and the topping sauces. This month Paddy introduces the Spotted Dick, a fantastic fruit soda bread, great toasted for breakfast or served with cheese. ‘To be sure and pop by and say hello and try some traditional Irish Soda Bread, it will take you to Ireland, first class!’.