During 2019, Northside Produce Market celebrates its 20th year of trading. We couldn’t have done it without all of the dedicated North Sydney Community Centre staff and volunteers, our wonderful customers and of course all of our fabulous stallholders. Throughout the year we will feature some of the stallholders so that you can discover a little more of their story.

K’iche’ - pronounced “Key Che” (as in Guevara) was the final Mayan Kingdom to fall to the Spanish in the sixteenth century. It is also the town in the Guatemalan Highlands where Mike Magee lived and taught English in a small school which was sponsored by the Sydney based Mayan Coffee. Upon Mike’s return to Sydney and with a desire to keep the Guatemalan fire burning within, he formed K’iche’ Café in 2012 taking over the Mayan Coffee stall, which had been at Northside Produce Market from the beginning. Mike sources coffee beans from the Huehuetenango region in the northern highlands of Guatemala. “Great Guatemalan coffees have a bright cup character, floral hints, clean fruited notes, moderate body, and a lingering clean after taste.” Mike also offers a unique Chilli Coffee experience at his stall, perfect on a cold winter’s morning. This is a real eye opener and an amazing kick start to the day. Are you ready for the challenge? 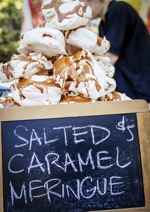 Initially Yolande Gray’s range of pure linen tea towels and gift cards led her to the markets to sell her wares. At home the foodie household (husband chef Martin Teplitzky) is very particular about the marmalade they eat and Yolande developed a unique caramelised organic orange marmalade to fit the bill. She added it to her stall a few years ago and has had an overwhelming response to the thick cut, organic jam. She also makes a regular orange marmalade with an equally enthusiastic following. Not too sweet, just the right bitter and packed with fruit. Of course Yolandes stall is also known for the sky high stack of cloudy meringues lathered in salted caramel. The yolks used to go to a gelato maker but Martin stepped in one day and whipped up a batch of the now regular addition of lemon butter. Finding a really good bucket of Meyer lemons inspired a batch of preserved lemons in bay and rosemary which has now also become a regular favourite at the stall. With an expanded range, some rebranding was necessary. Patti Labelle’s hit song Lady Mamalade provided the inspiration with the key ingredient gitchie gitchie ya ya da da!