The philosophy of Kintsugi is that an object is sometimes broken; however, this is part of its life. Rather than throwing the broken object away, Kintsugi technique can be used to repair the object, and its cracks remain to show its history and story.

Kintsugi is the unique and ancient Japanese art of repairing broken, chipped and cracked pottery using lacquer and gold.

In this beginners class you will learn some of the basic techniques of Kintsugi, similar to those used throughout its 550 year history. In this class, modern materials are used, with an original technique designed by Kintsugi Australia, so it can be learnt and practiced by anyone with ease.

At the end of this beginners class, you will be able to take home your repaired creation to appreciate for years to come. The tutors will explain where you can find the materials used in the class, almost all available in local stores in Australia, so that you will be able to repair your own objects at home.

Pottery repaired using Kintsugi dates back to 16th century Japan (the Muromachi period) and makes use of many crafts using lacquer, one of which is called “Makie”. Kintsugi grew alongside the Japanese philosophy of the tea ceremony, embracing a belief in the beauty of imperfections, and in our modern world it offers a sustainable approach, to repair and re-use, rather than discard.

During the Muromachi period (1338-1573), Yoshimasa Ashikaga, the 8th Shogun of the Ashikaga shogunate, accidentally cracked a pottery piece, which he had been treasuring. He sent the piece to China to get it repaired, however no one had the skill to repair cracked pottery, so the piece was sent back with a clamp on it.

Yoshimasa was not pleased with the appearance of this, so he ordered the craftsmen to find a better solution to repair the cracked pottery. This is said to be the beginning of Kintsugi in Japan.

Yoshimasa was a shogun, a hereditary commander-in-chief, but took barely any responsibilities in politics. However, through this pursuit of a suitable repair for his treasured, broken object, he inadvertently played an important role in shaping Japanese culture.

Pottery repaired using Kintsugi techniques are seen at museums and many of these pieces are recognized as highly treasured antiques and cultural assets.

Please bring an apron. ⭐︎ We will prepare the plate to be repaired. It is not always the same type of plate. All other materials needed at workshop are included, plus you will receive a textbook and tea. We also have Modern Kintsugi kit for people’s convenience at home, available for purchase at the workshop for $33. 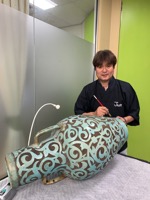 Jun Morooka is a kintsugi master. He is an expert in the Traditional Kintsugi method with natural lacquer (urushi) and gold. He has also developed his own method using modern material, bringing innovation to an ancient technique. He accepts commissions to repair broken pottery and ceramics with kintsugi.

Jun Morooka was born in Tokyo in 1959. He moved to Sydney in 1987 and in 2008 he started to manage a Japanese restaurant called JIPANG. He fell in love with kintsugi after watching a TV documentary. He decided to go back to Japan to train with five kintsugi masters in Kanazawa and Tokyo. In 2018, he established Kintsugi Australia in Sydney.

Jun Morooka teaches Traditional Kintsugi and Modern Kintsugi in Sydney, Melbourne and Newcastle, he exhibited his artwork at the Sydney Adventist Hospital in the Cardiac Rehabilitation Department. "Kibou" and "Negai" were displayed in the hospital to show that scars can become beautiful.

In June 2020, "Jikuu" was selected as a finalist in the 2020 Northern Beaches Art Prize - Open Category. The artwork was selected among over 800 entries and was displayed during an online exhibition (31 July - 30 September 2020).

Jun Morooka has appeared on a number of media outlets, such as ABC News and SBS Australia. An audio interview is available on SBS Japanese Radio and a video interview on SBS Australia Facebook page. He was also featured on ELLE DECOR (Spain).

And read more about Jun and Kintsugi here:

Jun also appeared, to give a kintsugi lesson, during the TV Show The Bachelor Australia, aired on Channel 10 on the 17th of September 2020.